It has been an exceptionally tough 8 days out on the Gibb River Road; the road that has broken many a vehicle and people. The last 3 days were, (I was nearly going to write ‘probably’) the toughest!

The 300 km section of my ride between Mt Barnett and Derby was extraordinarily tougher than I ever thought and not just because of the continuous corrugated, rocky and sandy road.  The soaring heat which made my water bottles hotter than the already hot tap water added to the tough conditions. Although I made sure I had enough water to last the 3 days and 2 nights ride. Carrying enough food for this section was not a problem.   The problem was that it was difficult to eat in the heat, so lucky I had plenty in the larder, as they say.

Knowing that there was at least 80 kms of bitumen into Derby and I would get some relief from the dirt road, I planned to do at least 90 plus kms on the first 2 days and 120 km to Derby on the 3rd.

The first day was surprisingly hard on the legs with all the extra weight (water) I had to carry as there were no water stops. I managed to reach 97 kms (7:37:54 riding) and found a nice campsite. I had hit the wall big time that day; there were two big climbs over the range and the temperature got to 41 degrees. Did I mention: the flies would annoy by day and as soon as the sun goes down they go and the other ‘biters’ come out. There were ants, three different ones, so I would have to be careful where I set up camp, making sure I selected the right tree as ants often climb up them.

4 am: I got up; I ate breakfast and packed in the dark knowing I had another big day. An early start is my secret; I smash out 40 to 50 kms before it gets too hot, and my water stays cool. The day was the same as yesterday: corrugations, sand and rocks. Oh, did I mention that every time a vehicle went past I was covered in red dust. One WA couple stopped and gave me a cold bottle of water – it was amazing how much better you feel when your core temperature goes down! About an hour later another couple who gave me a bottle of cool water 2 days ago passed me another bottle as they drove slowly beside me (John & Wendy CH 40). I hit the wall again that afternoon! What a ride, 94 km (7:02:47 riding).

I found a flat bit of dirt to set up camp and when I pulled up I noticed small droplets of water from my right pannier. I was devastated, two of my 1.5 litre bottles had split and I lost all the water! Some of my camping gear was also soaked. I unpacked all the gear and hung it up on a makeshift clothes line, so I could at least sleep on a dry bed. It dried quite quickly as it was 43 degrees today. I had dinner and half a cup of coffee and retired for a well needed sleep.

The next morning came and I was ready to reach Derby. I was hoping for a break from the relentless roughness of the roads today. I had my porridge, although not feeling like much I knew I had to eat for the days ride. I drank another half a cup of coffee. I didn’t clean my teeth, knowing that they would soon be covered in red dust and I didn’t want to waste any water, knowing I must now ration out my water. It was a long day, hot, although only 40 degrees today. There was a small headwind, but it was so nice when I started to ride on the bitumen again. I was so tired and I noticed my pace was slowing considerably; I had to use lower and lower gears. Now that’s a sign of hitting the WALL! Every 10 kms I would stop and drink the amount of water I had allocated for my rations. This would make the kms go easier for me.

And there it was – the end of the Gibb River Road. The big sign, 6km to town. At that point I was in the lowest gear I had (Granny Gear – for the bike pros). I just looked down at my shadow and kept telling myself that at the very next place I see that sells drinks, I could buy as many ice cold drinks as I wanted. With every km I could taste the bubbles go down. I nearly stopped at one point under a shady tree, only to think about all the 700+ kms of dirt and before I knew it I was inside the BP at Derby with three bottles of soft drink. Oh yeah! The stats for those who may be looking, today was 116 kms (7:00:03 riding)

I looked in my little side mirror at myself and smiled.

Two days off; eat, drink and be merry.

I left a few kilos on the Gibb River Rd

My tyres just sank in the sand 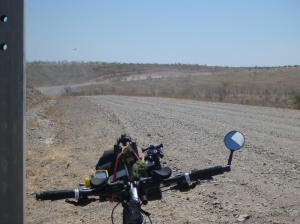 The endless corrugation on the road

My hotel for the night – on the side of the road.

Days until I leave